Fourth of July Fireworks, also called Fireworks, is a mini-game on VFK. It is located in the Victorian Age.

It's 1776, July Fourth and the Declaration of Independence has just been adopted.  America is covered with the verdure of the natural forests of her birth.  In her times this new country has seen great naval evolutions.  Fleets of powerful ships are sailing the waters which a century before were as deserted as ocean waters can be.  It is only a short time before the whole of the coast will become the home of American society carving its presence into the great wilderness.  By the end of our journey, we will see America defending her freedoms against invaders the second time in the war of 1812.  From there, Americans cleared the way for the progression of civilization to reach across the wild expanse of the country and build its influence in the world.

A game about fireworks wouldn't be complete without patriotic music and what better then Pyotr Ilyich Tchaikovsky's 1812 Overture?  Tchaikovsky originally wrote this piece of music in 1881 to commemorate Russia's victory over Napoleon's French army.  He had the innovative idea to include real cannon fire and zvons (bells) in his overture at the climax, which gives this music its amazing sound!  Today the 1812 overture is a song symbolic of freedom and is frequently played at 4th of July celebrations, like VFK's 4th of July Firework Game!  So turn up your sound and get ready for the beautiful music of Tchaikovsky as you light the night sky with fireworks!

The goal of our VFK 4th of July Firework game is to fill the night sky with sparkling fireworks, have a lot of fun, and earn a few credits too! Hitting fireworks as they turn into stars will earn the most points, remember exploding lower fireworks or fireworks before they become stars will still give you points, the higher the firework is in the sky before you explode it the higher the points!

Match the firework curser to the firework in the sky and click to explode.  Exploding fireworks using the wrong color firework curser will not count as points but will still explode the firework.  There are 4 levels, each with 3 rounds.  Keep track of your score as well as your opponents between levels with complete score results between each level.

Fourth of July Fireworks (Classic) is the original version of the mini-game. It is played the same way as the current version, but there are different stages and music tracks used. 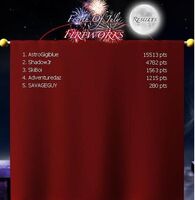